This morning I ran my final run for the Couch to 5k program! I don’t think I have ever stuck with any sort of fitness program for a month. Doing 9 weeks is a huge deal for me! One more thing to cross off The List!

Before taking off, I did a little bit of warming up in the house. I walked around for about 5 minutes. I walked forward and backward to warm up different muscles. Before leaving, I did some stretching. I’m focusing a lot of gentle stretching and light strengthening exercises on my calves. I’ve had some heel pain and I don’t want to hurt my Achilles. Having strong calf muscles will help protect that tendon.

I fully intended to start running as soon as I left the house, but as soon as I got out the door, I decided to get a few more minutes of walking in before starting to run. I picked an intersection to begin running and decided to go for at least 30 minutes (since that was the time the C25K program had outlined for today), but I would go farther as long as I felt comfortable. I was going to run nice and easy today and continue to work on keeping my heart rate down.

I slowed down quite a bit. My HRM still indicated that my HR was a little too high, but I didn’t feel winded at all. At the end of my 30 minutes, I kept going. By slowing down, I was able to run for 40 minutes. I only stopped then because I didn’t want to have the last leg of my run be uphill.

As far as I can tell, I ran for 3.18 miles. That’s a pace of 12:35/mile. Much slower than I started out the week, but I felt really good and ready to go again when I was done. I brought my % of maximum heart rate down another percent today. I was at 77 last run and 76 for this one.

I ran 5k today! No stopping at all! It was slow, but I RAN the whole distance.

Only one more run to complete until I’ve finished the C25K program! Woohoo!

I started out after Nathan got home from work . It was raining, but not too cold. It’s was in the 50’s. That’s not bad running weather. I actually felt a little warm by halfway through my run.

I had done a little research so that I would know where I should keep my heart rate number. I took off and looked at the HRM (heart rate monitor) to see what my numbers were like as I started my warm-up. It said some number in the 50’s. Hmmm… that alarmed me since my resting heart rate is 60. How could it be lower while I was walking? By the time I started running, I decided that there was something seriously wrong with my HRM as it never registered anything over the 80’s. So, I just decided to run easy and slow down so that I didn’t feel like I was pushing myself very much.

In choosing my easier route, I somehow ended up about 2 miles from home at the farthest point. For my run, I went 2.72 miles in 32 minutes. That’s a rate of 11:46/mile. That’s 1 minute slower per mile than I went on Tuesday. So, despite flying blind, I managed to slow it down. And I had a nice loooooooong walk to cool down on the way home.

When I got home, Nathan figured out that the HRM was set to show the percentage of my maximum HR. So, it looks like I averaged 77%. I was able to bring my average heart rate down about 25 beats. I feel pretty good about that and I didn’t feel wiped out at the end.

As I wrap up the Couch to 5k program this week (yeah!), I’m looking ahead to the next thing that I’ll be working on. I’ve been enjoying running and like having a plan laid out for me. After the 5k race on November 14th, I’m going to start working on the One Hour Runner program. Nathan will be 2 weeks from finishing the C25K then. He’s going to keep running and stick with running 30 minutes, 3x a week. Somehow, I’ve also convinced him to do a new challenge with me as well.

We’re going to do the 100 Push-up Challenge. Sounds like fun, doesn’t it? 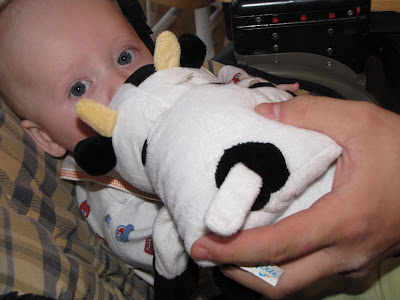 Isaac gets several bottles of formula a day. 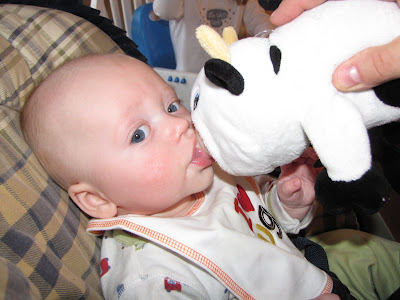 He’s not quite ready for cow’s milk, but we still let him use the cow bottle holder.

I was eager and nervous about getting to my run today. The sun was out and the weather was warmer. I was perfectly comfortable in my short-sleeved shirt. It was windy though and the direction of the wind worked against me at the beginning of the run and then again at the end.

After reading Kylene’s post about keeping track of her heart rate while she is working out, I was more aware of my own heart rate during today’s workout. I have done a tiny bit of research and it seems like long runs at a relatively low heart rate are most beneficial for increasing your stamina, avoiding injury and eventually helping with your speed. I need to get better at that because my running pace had my heart rate higher than it probably should be.

Only two more runs until I’m done with the Couch to 5k program!

The next day I laced on my running shoes and started up the program again. The next time I talked to my friend, I found out that she had looked up the information online and had shared it with her husband. He agreed to give it a shot. They got outfitted with good running shoes and they started the next day.

As this couple started on the Couch to 5k program, the husband started a blog to write about their running journey. The first day they ran they took their cell phone with them “just in case” because “Mr. F.” wasn’t convinced that he wouldn’t have a heart attack or need some sort of emergency medical help somewhere along the path.

Taking this journey with them has been awesome. At some point, I missed a day and ended up running the day after them. I would eagerly check their blog to see how their run went. When it came time for me to go and do my run, I would be absolutely convinced that I could do it because they had conquered it. I wont go into extensive detail because there are a few factors in play for a few more weeks that require anonymity, but I will say that “Mr. F.” started this journey with over 85 pounds to lose and seriously declining health.

From my own experience and definitely from theirs, I learned some important things:

8 weeks ago, running for 60 seconds was hard. Now I’m running for 30 minutes at a time! Mr. and Mrs. F. have many followers of their blog and are even inspiring people who are outside of the United States. Because of them, even Nathan has decided to run. He’s on week 5 this week and will be mastering a 20 minute run on Saturday!

**I’m moderating comments on this post just for a while to make sure I protect the identity of the “F” couple. Please don’t let that stop you from commenting!**

I’m counting today’s run as a bonus or extra run.

It was hard. Since this was “extra”, I wanted to use a route that showed my progress toward doing a 5k. I chose a route that included an extra .33 miles to account for my warm-up. The entire distance was 3.43 miles.

I used my Zune and had loaded 35 minutes worth of music. I had only used it before to listen to the running podcast with the techno music and Robert Ullrey saying, “You’re almost done. You’re halfway there….” I’m sure he’s a nice guy and he had to use whatever music he could find that had a free license for use anywhere, but techno isn’t my thing.

As soon as my music started, I broke into a grin. I was happy. It was making me happy to hear, Fracesca Battistelli sing, “I gotta couple dents in my fender. . .” I was almost through my warm-up when I passed two older gentlemen chatting. One of them told me that I was “looking good”. He said that it was okay for him to say that because he was old!

I was happy to be back on the road where I could see that I was making progress! On the trail, I would sometimes feel like I was running in place. I also realized the upside of a hilly route. Did you know that if you have a good uphill run, you will probably end up getting to go downhill at some point if you run a circular route? You did? Huh. Well, the downhills were nice.

I had a lovely downhill run on Fairlawn. I ran up 1st and took a right onto Fairlawn. That road goes down for about a half mile. Then I got to the bottom and had another revelation. Evidently, it was time to run uphill. For a long, long time. Darn hills. Darn Newsboys for making me run too fast and not pace myself better. Who had the brilliant idea to do this? At that point, I think Chris Sligh was singing.

I think I had it on shuffle because they didn’t play in this order. 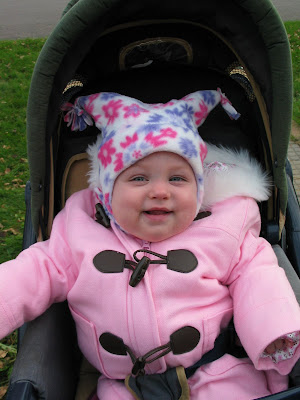 Exactly two years ago, Audrey was this little. Life changes so fast!

Another 28 minute run today. Nathan took the afternoon off so I took off and did the run at about 2:30. I took the trail again. Yeah for doing the same route two days in a row!

One great thing about the trail is that the main section is one mile. It makes for instant feedback on pace when you get to the end of the trail. At the two mile mark, I noted that I had shaved 10 seconds off my previous run. I also felt like I might fall over and die. I was pretty sure that I would not be able to run for another 6 minutes, but I lasted for another half mile before time was up (I think, maybe, probably… I can’t exactly map it, but there were some milestones that I used for indicators).

I have completed week 8!