We love Saturdays. As the kids call it, it’s a “stay at home day” for Daddy!

We went to Costco this morning to get our membership (we get reimbursed by Nathan’s work). It was fun to check things out there and the kids thought it was great that there were food samples!

After lunch, Audrey and I went and got our hair cut. I really needed a cut. I had quite a bit cut off. It will be perfect for summer.

Shortly after Isaac woke from his nap, we headed to the theatre to see the movie, Brave. I figured it might be a little busy. So, we arrived shortly before 4:00 for the 4:25 movie. The line to get tickets moved fast, but once I walked farther in toward the concessions, it was a mad house. I guess everyone thought it would be a good idea to go to a movie on a hot Saturday afternoon. We also chose to be there during the time that they do their bargain prices. I stood in line for popcorn for 45 minutes! I think there were 6 or 8 lines. I wouldn’t be surprised if there were 200 people in line for popcorn! They must have started the move a little late, because they had not finished the previews yet when I finally had the popcorn and went to meet up with Nathan and the kids. It was a good movie!

I’m thankful for central air. We’ve been spending most of our time indoors which means the only thing I really notice different is that I need to buckle the kids’ seat belts so they don’t burn themselves and the steering wheel on the car was so hot this evening that I could hardly hold onto it!

I’m thankful the weekend is here. I’m hoping for a nap tomorrow 🙂

103 degrees. That’s how hot it got here today. Tomorrow is supposed to be warmer! There is no humidity right now though. So, that’s the positive side to this!

Re-entry to life in TN has been emotional. Our trip was nice, but I was so on edge the whole time about trying to take care of the kids that I came back exhausted. Taking care of the kids on my own is one thing, but taking care of small children when they are not in their own environment takes a higher level of parenting effort.

I finally got the boy’s haircuts. 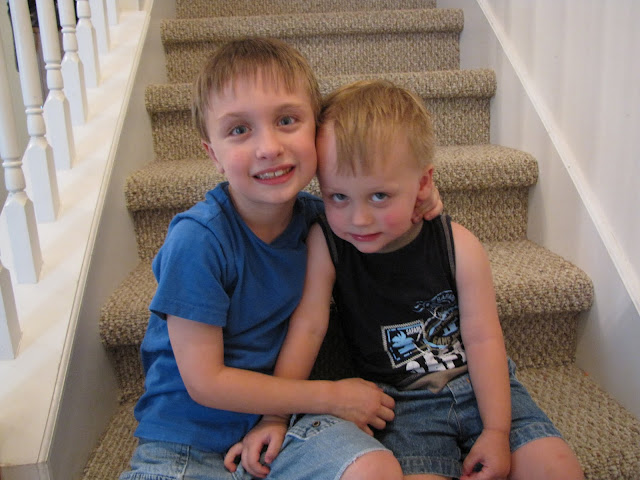 Today we did a little school work because we needed some structure to our day! This afternoon, we saw a puppet show at our local library. We ended the day with a swim in the pool. Our family was the only one there for most of the time!

I just checked the temperature. It looks like it’s cooled down a little. It’s only 92 right now.

On the way back to TN, we took a little detour to Metropolis. 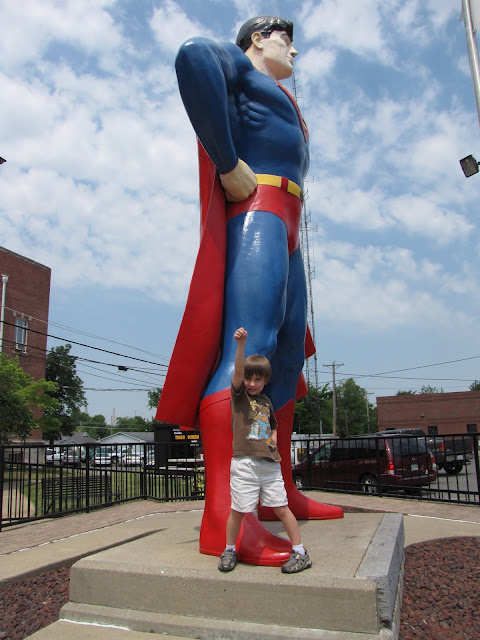 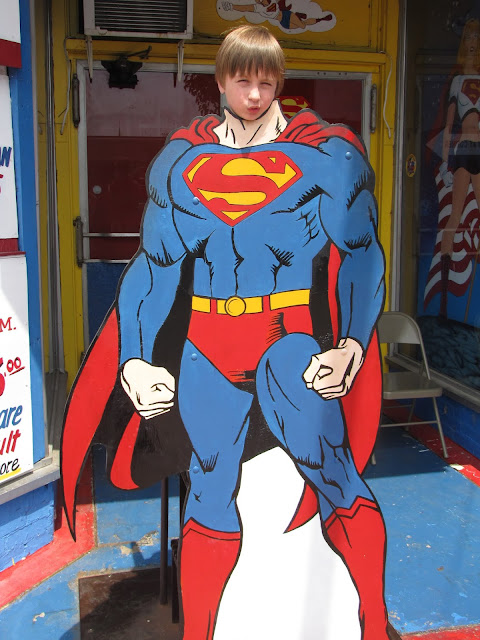 We arrived at our front door shortly after 3:00 this afternoon. Today’s drive made it very clear that I never would have been able to do that drive with the kids on my own without losing my mind. Isaac was telling us that he needed to go potty every hour and still wasn’t managing to keep his pants dry.

I was so happy to be back in our own home. We didn’t sleep well last night. When I booked the room, I accidentally booked a room with two double beds instead of two queen beds. Oops! So, Nathan and Ethan slept in one bed and Isaac and I in the other one. Audrey slept on a chair that was like a little bed. My bed-buddy (Isaac) was all over the bed last night 🙂

We had a great time seeing friends and family, but I don’t want to be away from Nathan for that long again!

For the first time in a long time, I’m sitting in a quiet house with no children around.Ethan, Audrey and Isaac are in Wisconsin with Nana and Grandpa Fritz and I’m at Brian and Missy’s house in Minnesota. I didn’t have to put anyone back in bed in the middle of the night and I didn’t have Isaac sneaking into my room at 6:00 to lay in bed with me (sort of miss that– a little). After sleeping in, I did a little shopping this morning. I’ve even taken time to put on makeup and fix my hair. It’s a miracle!

We’ve been away from home for a long time. The kids and I headed to MN on Saturday, June 9th. When we were planning this trip, we decided on a date that would give Dad and Joyce time with us before they needed to focus on planning for the Henning reunion and also give the kids quality time with the Fritz grandparents as well. If we do the reunion next year, we wont be gone as long since Dad and Joyce would not be planning the reunion. Nathan has remained in TN to so he can save vacation time for our trip back here in November.

Here are some highlights:

Running into someone from Chetek in Rockford, IL.

Playing in the kiddie pool at Grandpa Henning’s

Seeing the Friesen’s and seeing the kids have fun jumping in the puddles.

The Henning gathering with over 21 (I think) of us there! So thankful for all the extra hands in helping with the kids while we were there.

Seeing my Grandma Rosenfelt on Tuesday.

Randomly running into my aunt Kathy at Target in Cottage Grove.

Tomorrow night Nathan flies in to MSP. I get to see my husband for the first time in almost two weeks! Woohoo! I can’t wait!

I love my Logitech Cordless Wave keyboard. Almost as much as I love the Das Keyboard Model S Pro I use at work. (Thank you Crown for letting me keep it!)

But, sadly, the mouse that goes with my wave keyboard had lost the ability to middle click.

This morning, I was researching gVIM plugins, because that’s how I roll when my family’s away at reunion. (Well that and this, I suppose…) Anyway, this involved a lot of opening new tabs, which my hand tries to do automatically by middle-clicking. This poor mouse had been slowly middle-clicking worse and worse until today, it was only working one out of every 10 tries or so…it was very frustrating!

Yesterday, I got my father’s day gift from Amy and the kids. I’m forbidden from opening the envelopes that say “open on Sunday”, “open on Monday”, etc., but I was allowed to open my main present (Amy knows I don’t do waiting well…) It was an awesome t-shirt and permission to buy myself something nice for $10!

I came home, desoldered the broken switch I had found inside the mouse and soldered in a new one that I had in my salvaged parts bin. Unfortunately, this led to another problem since my new switch was about an eighth of an inch taller than the original, so a small plastic peg on the plastic enclosure no longer fit correctly. One trip to the tool closet out back and a minute of loud whirring noise and I and my trusty not-dremmel rotary tool were able to relieve that peg of it’s unneeded extra height…

Of course, at this point I had no idea if I had hosed the mouse by dinking around where I didn’t belong, but, I had a spare wireless mouse upstairs that I could have switched to if I had to (I just like this one better, so it’s worth the work to try to fix it!)

Lo and behold, after screwing it all back together it still works and I have a functioning middle click. And it’s a bit heftier button, to boot!

All told, a fun way to spend my morning. Thanks for the awesome presents, Amy, Ethan, Audrey and Isaac!

By now, Amy and the kids are on their way up to family reunion. With no access to the internet.

So, it’s safe to unveil the whole story to the rest of you. Just don’t drive up to wherever they’re staying and spoil the surprise for Ethan and Audrey. They’re not going to get to hear the last chapter until tomorrow! 🙂

BTW, I added Isaac to the story in Chapter 5. I guess he was very excited to be included.

It’s fun to write to my kids’ sense of humor. Chapter 6 is almost done. I had to take a long walk tonight to figure out what I wanted to have happen in chapter 7 — it became a full-page outline. And then, I could work backwards from there to get things set up right in chapter 6. I’m on track to have the whole thing finished by the time the kids and Amy go “off the grid” for family reunion. I can’t miss that deadline, since they won’t have access to the internet to get the exciting conclusion if I’m late!

But no one else had that trouble.

Then the next night, the boy went sleep walking again. He ate all their food. He went out the front door and ate their neighbor’s food. He went back to bed.

In the morning, the parents said, “Where has the food gone?” Then they heard the doorbell. Their neighbors came in. They said, “Did you eat our food?” and the parents said, “No.” So, they both called a detective. The detective came. They asked him to find out who stole their food. Then the next night, the boy came up and sleep walked AGAIN! He at their food, he ate their neighbor’s food, he ate the neighbor’s neighbor’s food then went back to bed.

In the morning, the detective got up and looked for clues. All he found was a bunch of footprints and even more crumbs.

Also, I’m excited that Ethan and Audrey have been writing stories back to me!

A long ways away in a town there was a boy. One day, when he went to sleep, he started sleep walking. He sleep walked into the kitchen, he ate some food, then ate some more, until all the food was gone.

Then he went back to bed and in the morning, he didn’t remember any of it!

When his parents got up to make him breakfast, they said, “Where has all the food gone?” “Someone stole it!” said the boy!
“But who?” said the dad. “I wonder if anyone else had the trouble.”
“I guess we’ll have to go to the store,” said the mom.