I was determined to redeem the terrible weigh-in I had last week. I tracked my food, didn’t eat after supper (most days), and I checked in with a friend when I really wanted an oatmeal cream pie(the big one that is 300 calories– then I realized that I would have to run 3 miles to burn it off). Finally, I finished my training for the Labor Day 5k. I ran Saturday, Monday, Wednesday and this morning.

The result was that I lost 2.4 lbs since last week! I’m lower than I was last week and lower than I was two weeks ago. My total weight loss is 3.4. I’m very pleased. My next goal for September is to lose 3 more lbs.

We visited Cheekwood today. It was a special day for homeschoolers. So, the kids were FREE and my admission was discounted! It’s a beautiful place with lots of trees and flowers and sculptures. Every summer they have a different exhibit that is kid friendly. This summer it was “Treehouses”. They were all based on works of literature. More info here. It is definitely a place I would love to take guests. 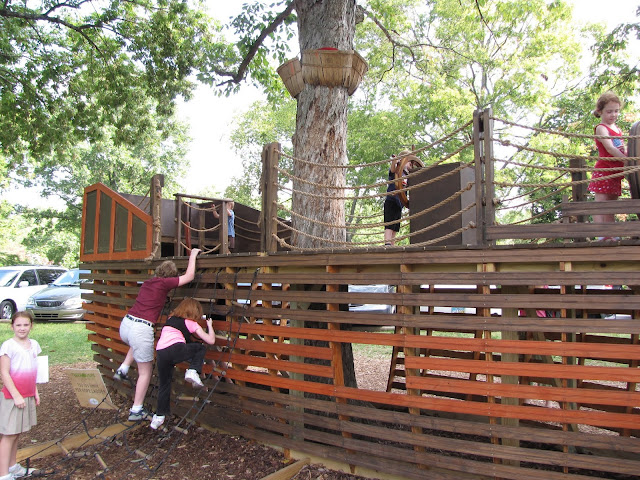 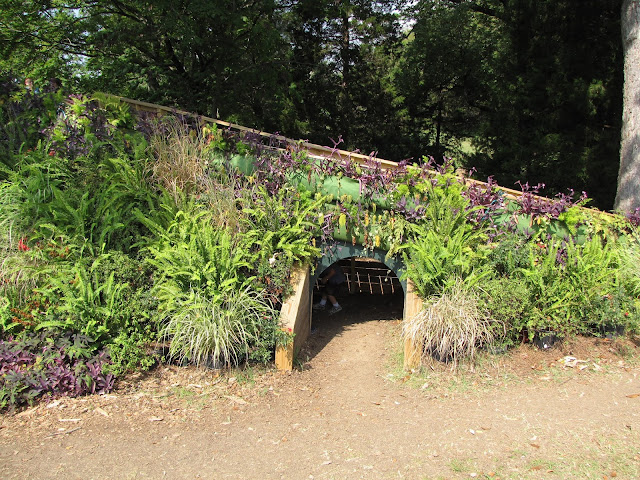 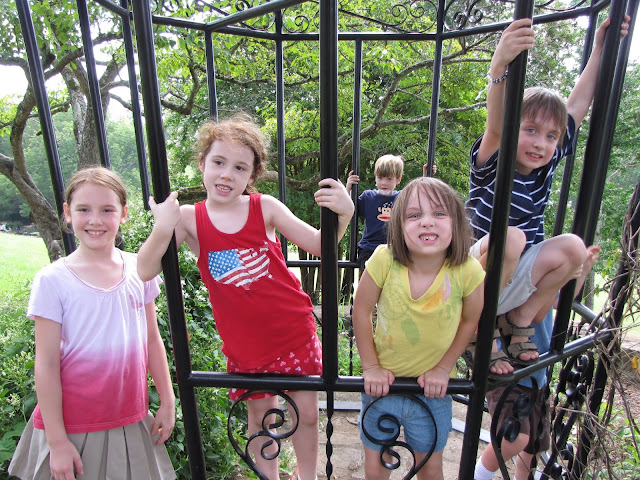 With our friends Annabelle, Bethany and Caleb(back) 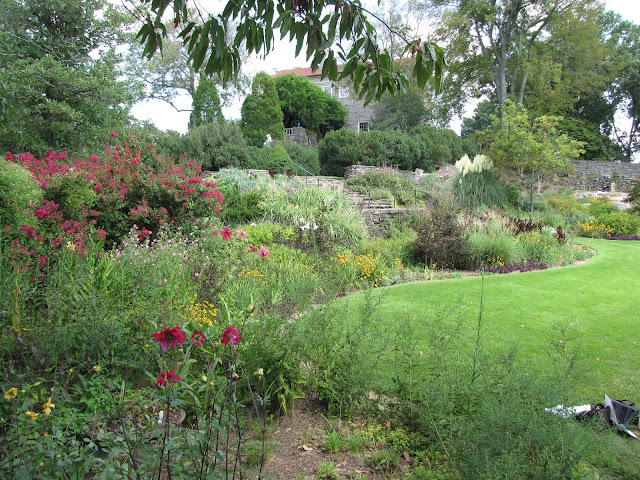 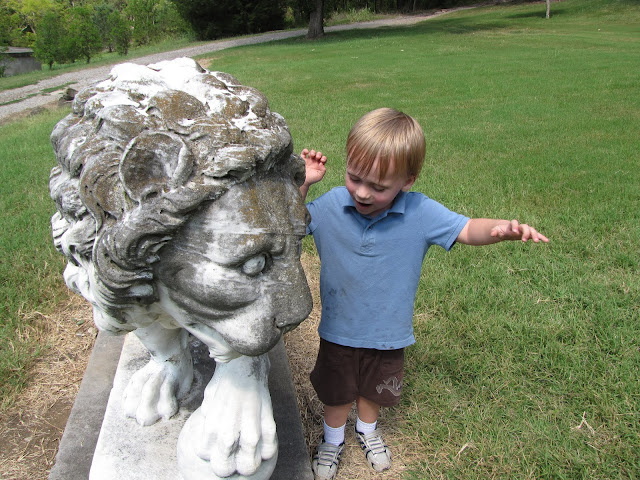 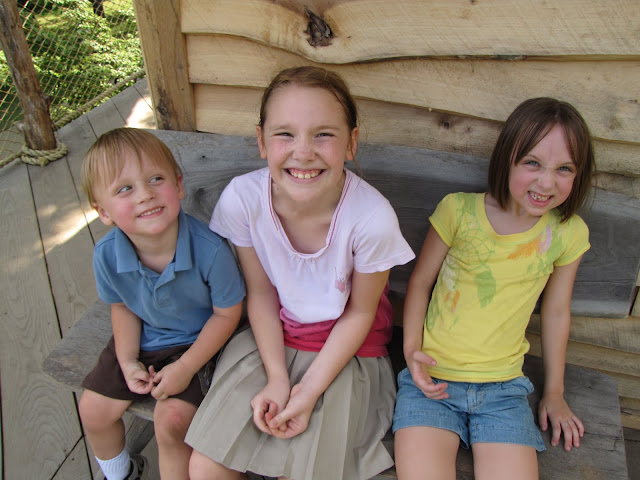 I was terrible this week. I’m up 2 lbs. That brings my total weight loss down to 1 lb.

I seem to have some bad habits to break. I knew that today’s results wouldn’t be good because I totally gave up yesterday. I’m not ready to give up for good though. Next week will be awesome!

I wasn’t able to do my Monday run in the morning this week. I was up late because Nathan wasn’t feeling well(turns out we all have/had Hand Foot and Mouth disease). Instead I decided not to get up at 5:45. I still wanted to run though. So, once I got supper ready that night, I went and ran. I was supposed to do 25 minutes of running. After 18 minutes of running, I could feel that familiar pain and tightening of my illiotibial band that goes from my hip down to the out side of my knee. I adjusted my gait to compensate. I stopped running at 20 minutes, walked a little and then finished with running 5 more minutes. My knee was in considerable pain when I finished. It’s the kind of pain where, if I had kept running, it would have hurt more and more with each step- like a rubber band that is being pulled tighter and tighter.

I had it in my mind that the 5k race I was going to do on Labor Day would have to be finished with intervals of walking and running- IF I actually did it. A conversation about my race-day plans led to an emotional conversation. Well meaning words meant to encourage me fell on me like a knife to my gut. I spent a lot of yesterday afternoon processing why I would have such an emotional reaction to a theological difference which may have just been due to semantics.

The suggestion that God would heal my knee put me in an tailspin.

I thought I was frustrated by our different conclusions on our theology of healing, but that was secondary to the main question that prodded at me: “Are you willing to ask God to heal your knee?”

I sat with tears streaming down my face and asked myself if I trusted God. You may or may not agree with me, but I believe it’s possible for God to answer “no” to requests for healing here on earth and that he might deny a request of something else equally worthy. That does not mean that I don’t have faith. And the “no” isn’t always because of something someone did or didn’t do or said or didn’t say. It means that when I go to God in prayer about something, I have to make a choice to trust a God who might not give me the answer I want. There is nothing easy about that. In fact, it makes no sense sometimes. The way God chooses who or what to say, “Yes,” to and His timing for answering at all can appear random.

My mind has been swirling with memories of God saying, “No”, or seeming silent.

I laid in bed last night and cried. I told God what He already knew. I told Him that my knee hurt. I told Him that I believed that He could heal it. I told him that I wanted to believe that He WOULD heal it, but I wasn’t sure He would. I told Nathan I wasn’t even sure what I believed anymore. I told God that I didn’t understand and that I needed help to put myself in the position of risking disappointment.

I know it seems melodramatic and that it’s just knee pain. It’s not a huge deal in the whole scheme of things, but at this point for me that conversation was a big step.

This morning I got up, put my shoes on, took a couple of ibuprofen and went to meet my running partner. My knee felt a little uncomfortable when we started. It gave signs that it would not hold out for as long as I needed it to. 25 minutes later, I found myself completing the run with no knee pain at all. I don’t know what this means for my knee pain for the future, but today, God said, “Yes, ” and I’m thankful. I know He is the only reason I was able to make that run today.

On Wednesday night Isaac puked and had a fever. He still had a fever for most of the next day.

On Saturday night Ethan came down with a fever. Nathan stayed home from church with him.

On Sunday afternoon Audrey fell asleep several different times. Nathan checked her temperature. She had a fever. She still has a fever and is tired this morning.

Last night Nathan spiked a fever and was feeling yucky. He stayed home for the morning, but is feeling better now and headed to work.

I hope I stay healthy and everyone recovers quickly. Audrey seems to be the only one still sick.

I don’t think I earned it, but somehow I lost 1.6 lbs this past week!

We’ve had Max for a year!

We celebrated by baking a cake, singing “Happy Birthday” (we don’t know his birthday, just that he is 6) and having the kids blow out the candles. Max was kenneled for most of that because we didn’t want him to eat the cake. He did get some doggie treats though.

He has been a nice addition to our family. The kids love him. They are as excited about him now as they were a year ago. I thought the novelty would wear off, but it hasn’t. Nathan and I adore him too. He was good company for Nathan while the rest of us were in MN this summer. The day we picked him up last summer, I couldn’t help but question the decision! He soon settled down and so did I. 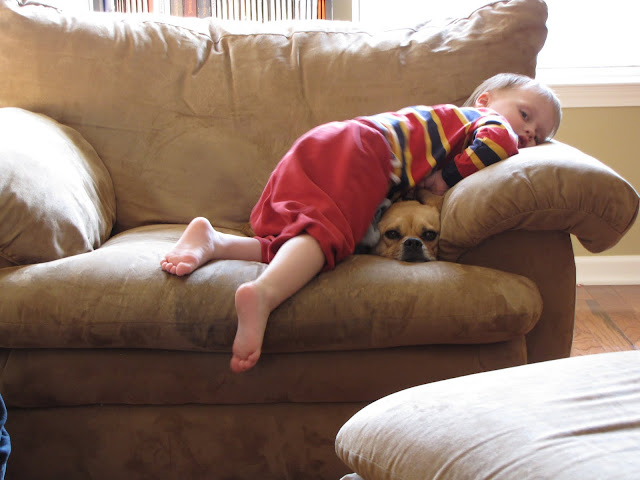 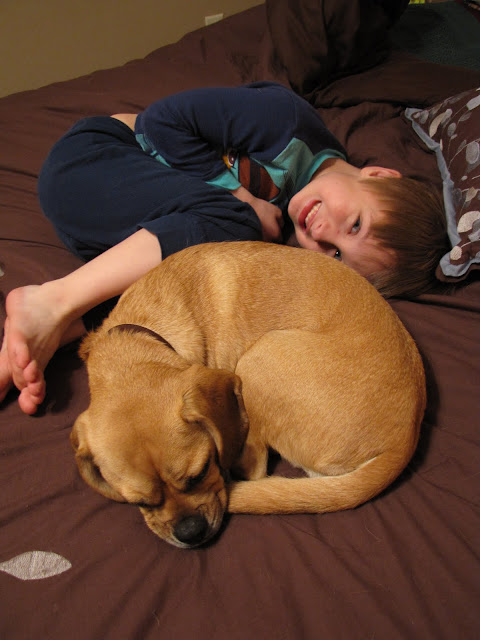 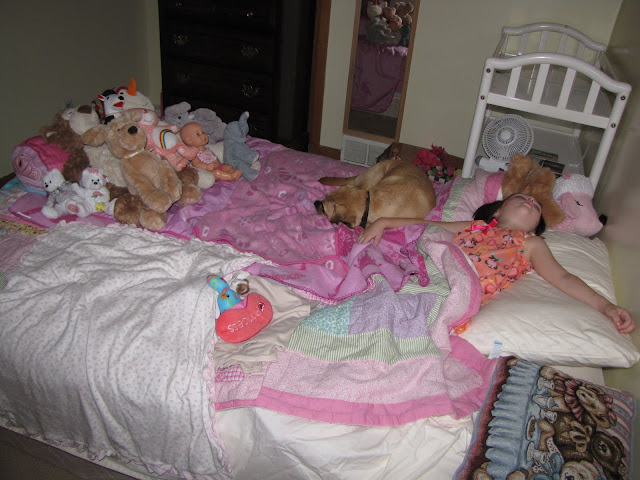 The sooner you get to the end of your rope, the sooner you’ll find God has been waiting there all along. Time to hand over the rope.

It has been feeling cooler here for the last several days. On Saturday we turned off the A/C and didn’t turn it on again until we wanted to cool it off a little at bedtime last night. I turned it off again today because it has been cooler and raining and doesn’t appear that it will get much warmer than 80. It’s nice to get a break from the heat. I can really tell the difference while I’m out running. It’s a welcome change.

The kids are sitting at the table painting with finger paints. We accomplished a lot this morning. We went to the library, watched a history video, worked on handwriting and phonics and language arts, and we completed today’s math assignments. We also started reading the Mouse and the Motorcycle. There are so many fun kids books! We have a few more school things to do today, but the kids are cooperating so well that it I’m having a hard time keeping up with them!

Last Friday we went to Cumberland Park with our homeschool group:

Cumberland Park is an innovative play space for children and families incorporating unique play structures and water features to create an exciting new attraction along Nashville’s riverfront. The park is approximately 6.5 acres, encompassing 900 feet of riverfront, and includes an outdoor amphitheater that can hold approximately 1,200 people for an event. -http://www.nashville.gov/parks/locations/cumberland.asp

This week’s exciting adventure is to head to the Nashville library for Aesop’s Fables puppet show.

On Saturday we had friends over to play board games. I won the first game– it was a complete fluke as I had no clue what I was doing! And then on Sunday night we had our first meeting with our small group from church. It seems like a great group. We’re very excited about getting to know these families more.

Lots of fun and good things are happening. I have some heavier issues weighing on me and I hope to get them resolved soon, but I’m trying to keep my focus on the positive things in the meantime.